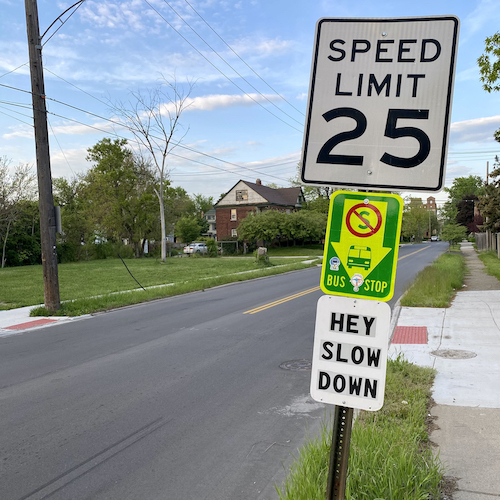 Wow! Great! Whoa! Oh. Huh. Hey!  These are all examples of English interjections. An interjection is one of the eight parts of speech. And the LearnersDictionary.com defines an interjection as “a spoken word, phrase, or sound that expresses a sudden or strong feeling.”

Interjections are very popular in English. They often have an exclamation point (!) after them when used in writing, but not always.

In my neighborhood, someone added a sign with an interjection to a set of street signs. There are a lot of messages in the three signs. Let’s take a look one by one.

The top sign is the speed limit sign. It is the speed people should travel in their car. Because I live in the U.S., a car’s speed is measured in miles per hour (mph.)  Twenty-five miles per hour is not too fast compared to speed limits on the highway which can be either 55 mph or 70 mph. In a residential neighborhood, 25 mph is common, but on streets with a lot of houses, the speed limit is usually 20 mph. However, many people drive slower in neighborhoods if there are a lot of kids that play outside.

The middle sign indicates there is a bus stop at this location. And the “s” with a circle and a diagonal line through it means there is “no standing” here. No standing means a parked car with its engine running is not allowed at this spot. There are a couple of small stickers on this sign that someone put on the sign to promote something.  Some people attach stickers to promote musical groups, share political messages, or publicize a business.

The bottom sign has the interjection, hey. This is not an official sign from the city government. It’s a sign that a person in the neighborhood created and put on the post holding the other signs. Many people don’t follow the speed limit on this street, and the person wants people to drive slower. “Slow down” is a way to tell someone to drive at a slower speed. When talking about car speed the opposite of slow down is speed up.

Adding signs to traffic signs is against the law, and I expect in the future the city’s traffic department will remove it. But, hey, maybe people will take notice and slow down!

Do people follow the speed limit where you live?